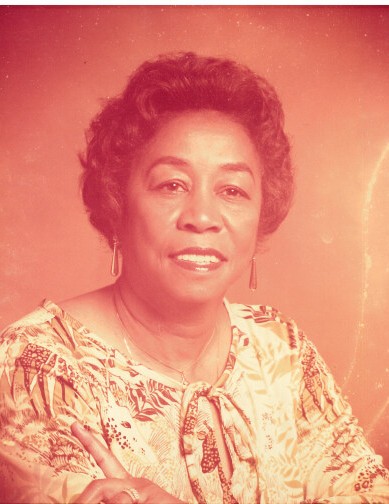 Stella Flowers Williams entered this world June 6, 1923 in San Antonio, Texas. She was called home to be with the Lord on August 11, 2020.

She received Christ at an early age. She was a member of Mount Calvary for over fifty years. She attended Sunday services regularly until her health began to fail. Whether or not she was physically able to attend services, she would faithfully send her tithes and offerings to the church.

Stella attended and graduated from Phillis Wheatley High School, San Antonio, Texas. She was in the first graduating class. After finishing, she became a member of the Alumna of her class. She attended and enjoyed many Homecoming Activities throughout the years.

After graduating from High School, Stella worked at Kelley Field for several years. Later, she worked at Frost Brothers for over 25 years in the Lingerie Department before retiring when her husband became ill. Stella and her daughters diligently took care of him until the Lord called him home.

Stella loved to travel and meet people! She visited friends and relatives in Los Angeles, California; Las Vegas, Nevada; Memphis, Tennessee; Baton Rouge, New Orleans, and Lake Charles, Louisiana and many cities throughout Texas! She never met a stranger. She had sweet spirit that drew people to her and made them feel comfortable talking to her.

Stella's husband and daughter Patricia preceded her in death. She leaves to cherish her memories: Phyllis Williams (daughter), Robert Williams (Husband of Patricia deceased), Four Grand Children who all reside in California: Frederick Smith, Stephanie Williams, Debra Smith, Cindy Sanger and a host of nieces and nephews. Longtime friends: Earnestine Cook, Henrietta Gibson, & Pat Merritt, along with many other dear friends who often visited her.

To send flowers to the family or plant a tree in memory of STELLA L. WILLIAMS, please visit our floral store.